Skunks are mammals known for their ability to spray a liquid with a strong odor. The strong musk characteristic of skunks is expelled from two scent glands near the base of the tail. The skunk prefers the desert, woodlands, grassy plains and suburbs. It lives throughout the interior and southern tier of Canadian provinces and all of the United States. Different species of skunk vary in appearance from black-and-white to brown or cream colored. 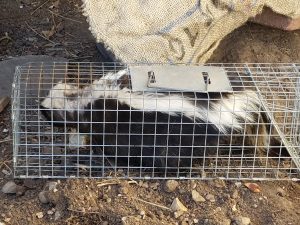 There are three types of Skunks found in our area:

Striped Skunk – Striped skunks have long black fur with two variable broad white stripes down the back. The white stripe on the top of its head forks into two separate stripes that run along its back. The head is triangular; the tail large and bushy. The striped skunk is more commonly seen. Striped skunks are about the size of the average house cat.

Hog Nose Skunk – A fairly large skunk, the hog-nosed skunk is dark brown to black with a single broad stripe running from the top of its head to the base of its tail. Its tail is mostly white with a few black hairs. Like other skunks, the hog-nosed skunk defends itself by shooting a sulphuric spray called mercaptan. The hog-nosed skunk can spray up to 15 feet and hit its target accurately. Its spray not only carries a terrible odor but, if it hits the eyes, will blind the skunk’s target for up to two days.

Although generally nomadic, a lazy, well fed skunk may stake out his territory and it may be your yard! Skunks will choose dark, quiet places to sleep in the daytime and forage for food at night. Being scavengers, their diet includes fruit, berries, eggs, rodents, scorpions, black widow spiders, dog and cat food and grubs.

Rabies – is an acute, fatal encephalomyelitis caused by neurotropic viruses. It is almost always transmitted by an animal bite that innoculates the virus into wounds. Any skunk bite or scratch should receive prompt local treatment by thorough cleansing of the wound with copious amounts of soap and water; this local treatment will significantly reduce the risk of rabies. Anyone who may have been exposed to rabies should be advised to always contact local health authorities immediately for advice about how to deal with their exposure and should also contact their personal physician as soon as possible.

Distemper – is one of the more common and serious diseases. Distemper is a contagious, incurable, often fatal, multisystemic viral disease that affects the respiratory, gastrointestinal, and central nervous systems. It is possible for humans to contract an asymptomatic (subclinical) CDV infection. Anyone who’s been immunized against measles (a related virus) is protected against CDV as well.

Leptospirosis – A serious, infectious bacterial disease which can affect skunks. In skunks the infection may not have any symptoms, however when it is transmitted to other incidental hosts (species such as humans and cats) the infection is much more severe and results in clinical signs. Acute infections cause a very high body temperature (up to 40o C or 104o F ) shivering and painful muscles, followed by vomiting, dehydration and shock. Less acute cases develop respiratory and kidney infections.

When skunks take shelter under homes, decks, or in garages, their presence is not usually tolerated by occupants of the building. All skunks have the ability to discharge a nauseating musk from their anal glands. They are capable of spraying their musk several times with accuracy to about 10 feet. Confrontation with pets often results in the pet being sprayed or bitten. Skunks can also cause severe damage to gardens and lawns by their digging activities. While searching for grubs and other subsoil insects, skunks frequently uproot turf and other plants. This damage consists of small pits ranging from 3 to 5 inches across, or sometimes large sections of sod are rolled back.

Damage Control
Skunks are often drawn to live under decks, porches, and sheds. Installing an exclusion barrier around the perimeter of the area so that they can’t get in is very effective. Don’t leave out pet food, or any other food that will attract skunks. Hire a professional wildlife trapper to trap the skunks and install a professional exclusion barrier for you.

Animal Damage Control (ADC) Solutions
If you encounter a skunk, do not disturb it or go near it. It may spray you, or may attack you if infected by the rabies virus. Skunks are one of the primary carriers of rabies. An ADC wildlife professional will remove the skunks that are living under or in your home or business with cage traps and then close off the entrances. Once the skunks are out, it is very important that the building perimeter be sealed to prevent re-infestation. Skunks cannot be relocated under state law.