The Cottontail is a common small rabbit of North America. It is approximately 15 to 19 inches in length and weighs two to four pounds. Most have stub tails with white undersides that show when they retreat; giving them their name, “cottontails”. Males and females are basically the same size and color, appearing gray or brownish with a short tail and big ears. 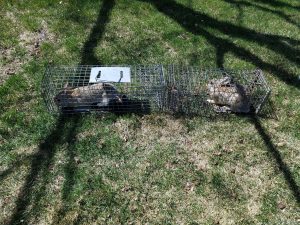 Cottontails tend to concentrate in habitats such as brush or junk piles, upland thickets, field edges or landscaped backyards where food and water are suitable. Underground dens are used primarily in extreme cold or wet weather and to escape pursuit. They survive well in the suburbs and get all they need for food, water, and shelter there.

Cottontails are most active at dawn and dusk and forage for food into the early evening hours. Population levels are directly linked to the quantity and quality of the habitat present. Rabbits spend their entire lives in an area of 10 acres or less.

Cottontails are sexually mature at about two months of age and breed from April to September. They usually have three to four litters of about five kittens. Nests typically are made in small depressions in the ground and are lined with grass and fur from the mother.

Like any mammal, rabbits can get rabies. Rabbits also can be infected with tularemia, which is transmissible to humans if an infected rabbit is handled or eaten undercooked.  Ticks that transmit Rocky Mountain spotted fever and Lyme disease may use rabbits as a host.

Damage to gardens and ornamental shrubbery is the most common conflict between humans and rabbits. Browsing on plants in yards, these animals do quite well finding food in the suburbs. Rabbit damage to plants is identified by the neat-clipped appearance of browsed vegetation, by gnawing on older woody growth, as well as obvious animal tracks and scat in the form of small piles of pea sized pellets (deer droppings look similar but are larger in size).

Damage Control
Most problems caused by rabbits can be solved by targeting and removing the specific rabbits that are responsible for the problems.

Animal Damage Control (ADC) Solutions
If you have been experiencing rabbit damage, the most effective approach is to use a combination of capture/removal and exclusion/preventative measures.

Animal Damage Control has been under contract with several cities removing problem rabbits with great success.