Beavers can be trapped year round, and relocation is permitted with a relocation permit obtained from the Colorado Parks and Wildlife.  Colorado’s beavers are busier than ever, much to the dismay of some landowners. ADC uses trapping as an effective and humane solution to your nuisance beaver problem.

Beaver Damage Control
Fencing and water control methods maybe a suitable form of prevention, however if beavers have established themselves and are causing damage, they may need to be removed. Landowners have used various methods – many of which were unsuccessful – to eliminate beavers on their land. Research conducted on the development of reproductive inhibitors and practical poisoning have not proven successful. Trapping remains an effective means of reducing beaver populations and has been proven effective many times throughout the history and range of the beaver.

The beaver is bulky (typically 40-50 pounds) with light and dark patches of fur, a large, paddle-shaped tail, and small dark eyes. The beaver is a primarily nocturnal, large, semi-aquatic rodent. The front feet are small with long, sharp, curved toe-nails while the hind feet are large and webbed. Beavers live in streams, rivers, marshes, and lakes. Every area in the state that has suitable food sources located near permanent water is a potential beaver habitat. 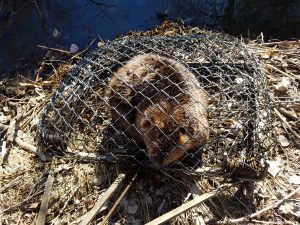 Tularemia – A bacterial disease associated with various animal species especially beavers, rabbits, and rodents. Tularemia occurs year-round throughout the United States and in Colorado, two seasonal peaks, the first in May and another in October. People can contract tularemia by handling infected animal carcasses, eating or drinking contaminated food or water, or breathing in F. tularensis. Symptoms could include sudden fever/chills, headaches, muscle aches, cough, progressive weakness, and pneumonia. If treated quickly with the appropriate antibiotics, this potentially fatal disease is curable. Rubber gloves should be worn when handling beavers or working where they live. Also, avoid drinking untreated water.

Giardiasis – This disease, found in beavers and other animals is a diarrheal illness caused by a one-celled, microscopic parasite that lives in the intestine of people and animals. It has become recognized as one of the most common causes of waterborne disease (drinking and recreational) in humans in the United States. The symptoms associated with giardiasis range from none (in light infections) to severe, chronic diarrhea. Giardia may be found in soil, food, water, or surfaces that have been contaminated. To protect yourself, practice good hygiene and avoid drinking or eating anything that may be contaminated. Boiling or filtering water removes the organisms that cause this disease.

Human and beaver goals often conflict and although they provide ecological benefits, these benefits must be weighed against threats to human interests like agriculture, transportation, and even endangered species conservation. Economic estimates of beaver damage in Colorado are not available, but timber, crops, ornamental plants, and even buildings have been damaged by beavers. Beaver dams may block drainage systems and flood roads, crops, and timberland. Primary and secondary water source contamination. Beavers cause millions of dollars of damage annually. Liability issues can arise due to half chewed trees on your property that have become dangerous.

If you are one of the many whose trees are destroyed…
Call Us , We Can Help!